Kipchoge, a 33-year-old Kenyan who is widely regarded as the most dominant distance runner of the modern era, shaved more than a minute off the previous world record, set four years ago by Dennis Kimetto. But as Kipchoge established his supremacy in recent years, Kimetto’s mark (2:02:57) seemed like a place holder for a record that Kipchoge would surely break. Experts thought it was only a matter of time.

Sure enough, Kipchoge came through on Sunday, turning the streets of Berlin into his personal canvas. He went out in a blistering tempo, covering the first 10 kilometers in 29:21. He was so fast, in fact, that two of his three pacesetters had to drop out about 15 minutes later. When his third peeled off the front halfway through the race, Kipchoge was left on his own. 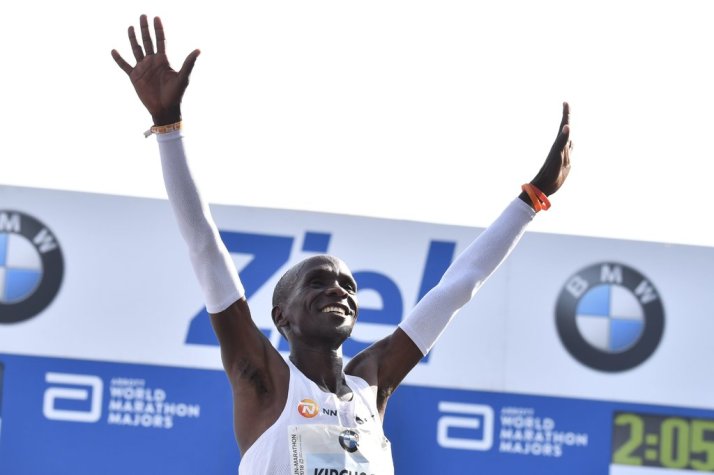 But rather than slow down, Kipchoge sped up — a virtuoso performance that left the rest of a star-studded field in his wake. Amos Kipruto, a Kenyan who placed second, finished nearly five minutes behind Kipchoge, in 2:06:23.

Kipchoge, the reigning Olympic champion, has now won 10 of the 11 marathons he has entered, including his last nine.

The youngest of four children, Kipchoge grew up in Kapsisiywa, a small village in Nandi County. His mother worked as a teacher. His father died when he was very young. As a child, he jogged to get to and from school.

Kipchoge lives in Eldoret, Kenya, with his wife and three children, and splits time between there and a training camp up in the hills, 8,000 feet above sea level. He has a meticulous training regimen, waking up at 5 a.m. to run.

He has already earned a number of accolades. In 2003, when he was 18, Kipchoge won a world championship when he out-sprinted Hicham El Guerrouj in the 5,000 meters at Stade de France outside Paris. El Guerrouj was then the world-record holder in the mile.